Germany has 1408 breweries, 623 of them in Bavaria (2016). They stand for more than 5000 different beers, maybe 7000, if you include seasonal beers, beer mix drinks and non-alcoholic beer (which is subject of dispute).

28 breweries have an output of more than 1 million hectolitre per year, and 668 are below thousand hl per year. The figure of 1408 breweries includes more than 400 brewpubs founded since 1985, the year when Rudi Vogel started the German brewpub movement.

Total beer production in Germany was 88 million hectolitres in 2016, more than 25 million below the all-time-high of 1992. Export is 16 million hl; with Italy in the number one position for export, followed by France, the Netherlands, China and USA. Imports (7.2 million hl) mainly come from Denmark, Belgium, the Czech Republic and the Netherlands. 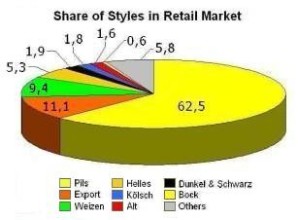 With a share of five eighths, Pils is the dominating style in the retail market (see chart on the right). Beer on tap covers about 20% of total consumption. There is a slow but steady decrease in Pils sales, despite its popularity.

Regional preferences are different: Pils has a clear North-South divide with 73% north of Elbe River, but only 24% in Bavaria. Weizen has 18.6% in Bavaria and Helles even more. Kölsch is only relevant in Cologne; Schwarzbier is preferred in the East.

Where do Germans buy beer? Or “What is a Getränkemarkt?” 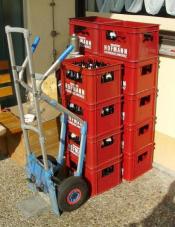 Apart from drinking beer in the pub, the Getränkeabholmarkt (short Getränkemarkt, we use "GAM" below) is the major source for German beer drinkers. A GAM is a very German type of shop. It can be described as a cash-and-carry market for all kinds of beverages. It sells beer, soft drinks, hard liquor, mineral water and juices; mainly in bottle crates. A standard beer crate has 20 bottles, each 0.5 litres. It is carried in the boot (in the trunk also), so these markets need to have a parking lot (or a car-park); they can be found outside the city centres. Of course you can also buy half-crates, six-packs and single bottles there, but German men prefer full-size bottle crates.

On bottle crates: Half-crates have become popular in the last years of lower beer consumption. Beer crates having 24 bottles of 0.33 litres are popular in the North and the West. Some breweries have created special sizes (16 or 25 bottles) to differentiate from competitors (and to make price comparison more difficult). The Hanover region is famous for its oversize crates of 30 bottles.

The second source for beer is, of course, the supermarket; they offer all pack sizes and sell single bottles from the shelf. For a supermarket, beer is just one item among hundreds of others they offer, so a supermarket is not a ground for beer hunters.

The third source for beer is the kiosk. Neighbourhood kiosks play an important role in the city centres (far away from the big Getränkemarkt), and in the big cities they are still open when the super markets close. They are frequently used by people who have no car. Here you buy your daily need, and – in summer – share the first beer with your neighbour.

A Kiosk in the Frankfurt Area is called a Trinkhalle

The Selection of beers Or “Where to get Schlenkerla?”

At the kiosk you find a selection of 10 or 20 different beers, some well-known brands plus a regional brand and a local brand - if there is one. More or less all kiosks in a city have the same selection, despite the fact that they are run independently. What you will see quite often is that the selection of cigarettes, magazines and ever chocolate bars is bigger than the choice of beer.

If you expect to have a greater selection at the supermarket, you will be disappointed. The shelves may be bigger, but the selection is more or less the same as at the kiosk, just prices are a little lower.

If you go to a Getränkemarkt, you might find more beers, but there is no guarantee. There are about 13.000 GAM in Germany, all sizes, starting from a former garage up to a store of 1000 square meters. And it is quite simple: The bigger the store the more space is available to display different crates from a lot of breweries. A GAM that offers beers from 30 or more breweries is called well-assorted in Germany.

If a beverage wholesaler has a major position or a monopole in a city or a region, you will not be able to get beer in a supermarket, at a kiosk or in a restaurant that is not on his list. A wholesaler will not buy some crates from a small brewery for profit reasons: everything smaller that a pallet is of no interest. 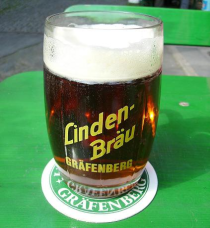 This beer does not care about shelf life

There is a second, very important reason why you do not find beer from small breweries in supermarkets, kiosks and most GAM. Beer from small breweries, in particular in Franconia, is good for four or six weeks, because it is not treated. The same applies for beer from brewpubs. It is unfiltered and not pasteurized. Four weeks is simply too short for wholesaling.

Having a longer shelf life is not essential for a small brewery, because they only sell bottled beer directly to consumers and via the local grocery store, and maybe some kegs to another local pub. But shelf life is an essential point if you want to bring your beer to a GAM in Berlin. And if a beer cannot find its way to Berlin, it will definitely not find it's way to the USA.

A third reason is not obvious at first sight. Germany’s leading wholesaler is owned by three of the top ten breweries in Germany (plus Nestlé). They are definitely not interested in giving even medium-size breweries a chance for wider distribution. The second largest wholesaler runs more than 400 GAM directly, and about 500 as franchisor. This automatically limits the offering. The owner of a Getränkemarkt must be independent and, of course, a beer enthusiast if he offers rare beers and beers from small breweries.

How to Get German Beer in Germany 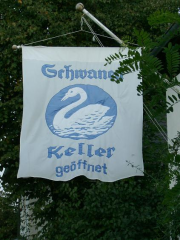 You go to Germany, or a friend of yours is visiting Germany? You have a list of your favourite beers or the most wanted beers? Forget about it. As long as you have only a very few days in a city you are limited to what is offered there. Very few cities have shops specialized in rare beers (lists can befound on ratebeer). Here the owner might be a beer enthusiast and actively manages his portfolio by contacting breweries directly. If there is no beer shop, there is only one way to buy some special beers. Pound the streets to several GAMs (ask for the big ones), and if you are lucky you find some that are served by different wholesalers – that leads to a bigger selection. If you are not familiar with the brands, do not take beer from the pallets, but from the crates that you see in a limited number only.

A car will be helpful anyway; we already said that the big stores are outside the city centre (like Maruhn, who claims to have the greatest selection all over, at the autobahn south of Frankfurt). Later, do not forget to check whether there is one of the 385 brewpubs around. Take a taxi home.

If you love beer and have some more time, there is only one option. Go to Bamberg, or even better, to one of the small towns around, hike through the country side, find a brewery in almost every village and feel like in heaven. The web is full of recommendations where exactly to go. If you have read three of them, you will find that there is no better option to enjoy German beer. 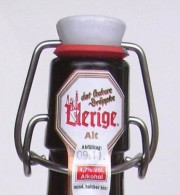 For some more information about the German beer market, see the blog of Todd Ehresman: All Sink Cherman